Home/News, Uncategorized/Scenarios of the future
Previous Next

The European energy market is changing to combat global climate change. Technological breakthroughs are also emerging in traditional power sources and a major increase of various renewable energy sources is expected in the European power market in the future. The physical power market is characterized by the need to balance production and consumption in real time. Solar and wind, however, are only available when the sun is shining and the wind is blowing, so called intermittent energy sources. To meet this challenge, the system operator needs tools to bridge the gap between power production and consumption.

Hydropower is considered a flexible renewable resource, as many hydropower plants are capable to start and stop production independent of weather, unlike other intermittent renewable resources. This makes hydropower a great stabilizer in a power grid where a big portion of intermittent energy sources are connected. Hydropower, however, is not the only option to stabilize a grid and other possible technologies and solutions can provide these services. Therefore, the role of hydropower is to some extent uncertain.

The Hydroflex project aims to increase the flexibility of hydropower even further by allowing more rapid starts and stops, making hydropower a better fit for future markets. An important question to answer becomes, how will these future markets look like?

As a natural first step for the Hydroflex project, the Institute of Power Systems and Power Economics at RWTH Aachen (Work Package 2 lead) wrote a report (Siemonsmeier et al., 2018) representing three different future scenarios for the European energy system and the role of hydropower within them. The three scenarios defined in the report are as follows:

This scenario represents the Hydroflex project’s best guess of how the future will look based on a perspective from 2018. This scenario will act as a reference for the other two scenarios, hence the name. This scenario is characterized by a gradual increase of intermittent renewable energy sources, a slow decrease of coal and lignite power plants, and a gradual integration of technologies to balance fluctuating production. Nordic hydropower is one option among many technologies to provide flexibility in this scenario.

This future scenario represents an optimistic view for the role of hydropower as a stabilizer of the grid. A future where hydropower plays a significant role in the overall flexibility of the power grids in Europe. In this scenario there are a great deal of other intermittent or weather dependent renewable resources connected to larger grids where flexible hydropower plants are essential as a stabilizer.

This scenario represents a future where the flexibility of hydropower is less significant due to major changes in the energy infrastructure and how energy is produced and stored. This scenario includes a high number of smaller grids where most consumers also produce their own energy (e.g. substantial amount of private housing with solar panels on the roof and battery packs in the garage). The Producer is the Consumer, hence the name.

These three scenarios serve as basis for the activities in the other HydroFlex work packages and represent a crucial stepping stone for upcoming market, grid and stability simulations in work package 2. 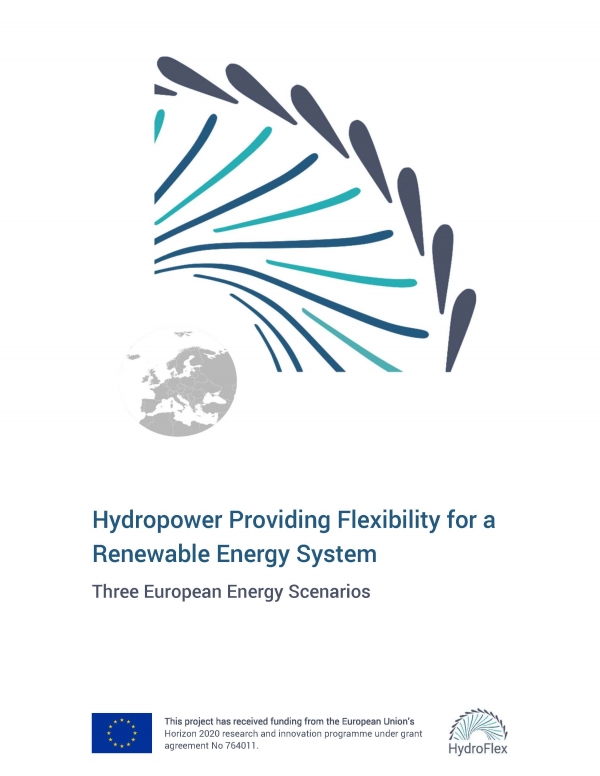